Pistol Ammo: Save Money and Your Life [Ultimate Guide]

We'll cover what pistol ammo is, which calibers are best, myths about calibers and pistol shots, and how ammo types save you money (or your life). We'll do this with real data from self defense shootings, video of real shootings, experiments, expert testimony, and more.


Ammunition (ammo) is what a pistol needs to fire.
It's stored inside the pistol's magazine.

Ammo is composed of a few parts:

But the 7.62 is devastating compared to the 9mm. How is that?

A pistol can stop a threat in 3 ways: How does caliber affect this?

Pistols rely on shot placement to stop threats:
We can see this in action below. No one made it out alive, but they kept fighting after taking mortal wounds: The right caliber choice comes down to context.

What Pistol Caliber is Best? 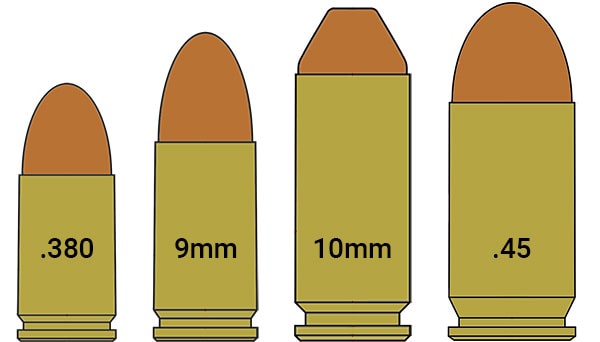 The best pistol caliber depends on your goal.

9mmis the best caliber for home defense. Why?

10mmis the best caliber for defense when hiking in bear country. Why? More powerful calibers than 10mm get the job done, of course. But they trade much more in ammo capacity, recoil, and cost.

If you're considering a 9mm pistol with more capacity than your local laws allow, .45 ACPcan be a better choice. Why? You get a slightly more effective round without losing ammo capacity. There are still some drawbacks for .45 ACP, though:

I Know My Caliber. Now What?

Not all ammo is created equal. Even with the right caliber, the wrong type of ammo could cost you tons of money, or fail to stop a life-ending threat. Find out more:

How Practice Ammo Saves You Money 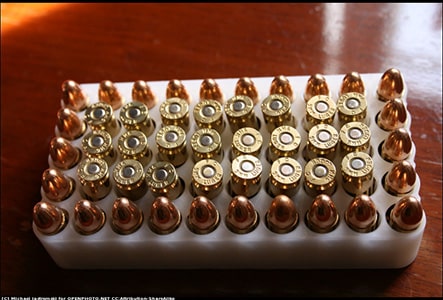 Practice ammo is made to be cheap, but not very effective. Why?

The costs add up fast, but so do savings.

When facing a deadly threat, stopping it ASAP is the top priority. If the threat even gets an extra second to act, that could spell death or grievous bodily harm for you or innocent bystanders.

In pistols, ammo for practice and training punches holes in targets: A 9mm round punches a 9mm hole. However, a 9mm defensive round can punch an 18mm hole. This can turn a near-vital shot into a vital one, and end a fight much sooner.

Defensive ammo is also made to stop inside the target, instead of passing through and endangering bystanders.

However, not all defensive ammo is made equal. The wrong kind can waste your money or blow up your gun. Let's cover how to choose the right kind for your pistol.

Hollow points expand up to twice their width, making a mushroom shape on impact with a barrier or threat. 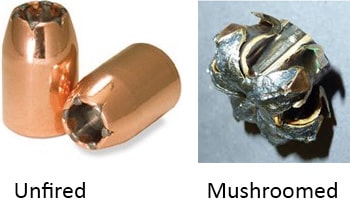 Before you buy hollow points, check ballistics tests to see how your prospective rounds expand at that barrel length. (Or, see our recommended defensive ammo in each of our best ammo pages, as we've already done the work for you!)


Overpressure Ammo: Power with a Cost

Some defensive ammo is rated +P (overpressure). This means extra gunpowder, and 10% more power and recoil.

That also means extra pressure in the pistol's chamber. If your pistol isn't rated for +P ammo, that ammo can damage your pistol. It could even cause your pistol to explode in your hand!

Ammo rated +P+ has about 15% more power and pressure.

Unfortunately, most small pistols aren't rated for +P or +P+ ammo. You'd be better off with different hollow points designed for a 3" barrel.

Worse yet, most ammo manufacturers don't say what barrel length their hollow points are designed for! Finding the right hollow points for your pistol takes time and research.

Instead of dealing with all that, choose newer bullet designs by Lehigh Defense: 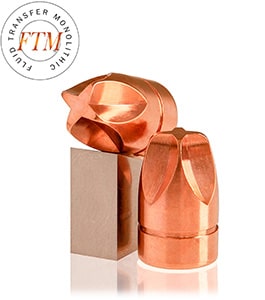 Fluid Transfer Monolithic (FTM) bullets perform about 4x better than most hollow points. They don't risk a sharp decrease in performance if your barrel is too short, or if the target wears thick clothing. And unlike all other pistol rounds, they directly gain performance from more power.

However, FTMs penetrate barriers better than FMJ bullets. This can be a bad thing if you miss your target. Or, if your target is behind a barrier, FTMs may penetrate where hollow points would fail. Just be aware.

The results in hogs apply to people.

FTM rounds are the real deal and the future of defensive pistol ammo. 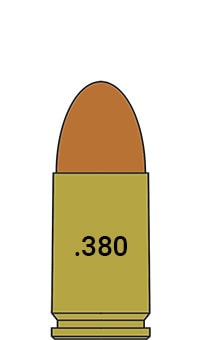 .380 ACP is best for daily carry in pocket pistols under 1 lb. It has half the recoil of 9mm, but half the effective range.
Get the best price, in-stock .380 ammo 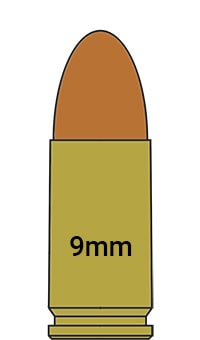 9mm is best for home defense and daily carry in pistols over 1 lb. It's often the cheapest and easiest to find.
Get the best price, in-stock 9mm ammo 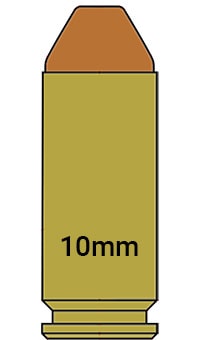 10mm is best for defense against large, dangerous animals like bears. It packs the power to punch through their bones and hit vitals.
Get the best price, in-stock 10mm ammo